Thompson founded his production company Imani Films in 2012.  His first production exposed audiences to the often misunderstood “wet-foot-dry-foot” law, a former U.S. immigration policy that stated that anyone who fled Cuba and entered the United States would be allowed to pursue residency a year later.

The film, “Noventa,” is an award-winning story about Cubans with conflicting opinions about how to execute a dangerous plan to escape the Communist island country. “Noventa” won Audience Choice in Film Miami Fest 2015, Best Actress (Margarita Romero) in Film Miami Fest 2015, Best Short Film in the Miami Independent Film Festival 2015, and Official Selection at the 2016 Hollywood FL Film Festival.

Thompson also founded Florida’s first International Film Festival for a Web Series, also known as the Miami Web Series Festival or Miami WebFest.  The exposure from this event has contributed to the success of several independently produced web series that subsequently secured distribution with Netflix, Vivendi and other prominent networks.

Thompson was awarded the key to the City of Miami in 2017 for his contributions to the city’s artistic and veteran communities.

ArtServe is an award-winning arts incubator that is advancing the arts for social good.  ArtServe is accepting donations here or at artserve.org to help the non-profit continue to support arts activism initiatives promoting diversity, equity and inclusion. Each year its programs contribute tangibly to the region’s economy, help 2,000 artists sell their work and build businesses, and engage countless citizens who walk through the doors. To do this, they need the community’s help through donations, sponsorships and memberships.  Requests and questions about the ArtServe facility or programs can be emailed to info@artserve.org.

Fort Lauderdale-based ArtServe – one of the country’s first arts incubators – has a 30-year history of building Broward County communities through the arts. Each year its programs contribute tangibly to the region’s economy, help 2,000 artists sell their work and build businesses, and engage countless citizens who walk through the doors.  ArtServe in 2020 will continue its transformation into a creative laboratory, a hub for experimental artists committed to diversity, equity and inclusion. ArtServe has won several awards for innovation in the arts. It is supported in part by the Broward County Board of County Commissioners as recommended by the Broward Cultural Council and Florida’s Department of State and the Division of Cultural Affairs. www.artserve.org 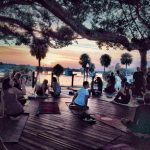 Twilight Yoga at the Light