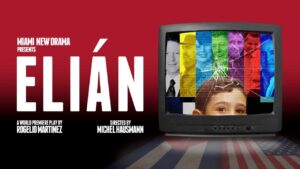 The story we all know; told in a way we never imagined

In 1999, a young Cuban refugee, Elián Gonzalez, was found on the shores of Florida clinging to life. We know the story ends with a boy in a closet, a gun pointed at him; but few of us know how it got to that moment. With the help of key players, new information has been uncovered that paints a more complete and accurate picture of the story we all thought we knew. This fast-paced, energetic, and emotionally charged play, revisits an event that left its mark on our community and our country.

“ELIÁN is a story that is very personal to our city and resonated deeply with our Cuban-American community” said Michel Hausmann, Artistic Director. “It was an event that divided our community, had both national and international consequences, and helped define the 2000 elections which changed our global history. This work is an exploration of that moment from the perspective of some of the protagonists of this conflict and will reveal new information that the public has never been made aware of. It will be shocking, irreverent, and emotionally charged. We are thrilled to continue our collaboration with Rogelio, and I feel a great responsibility to be directing this story that is so close to our community.”

ELIÁN runs October 27 – November 20 at the Colony Theatre (1040 Lincoln Road, Miami Beach) with an opening night scheduled for October 29th. Performances are scheduled Thursdays through Saturdays at 8 pm and Sundays at 3 pm. Tickets ($45 – $70) are on sale at miaminewdrama.org or by calling Miami New Drama’s Box Office at (305) 674 -1040.

To register for this event please visit the following URL: https://miaminewdrama.org/ →

Miami New Drama is a not-for-profit 501(c)3 presenting and producing organization. We are committed to theatrical excellence and theater-making as a means of social engagement, cultural conversation and human interaction.