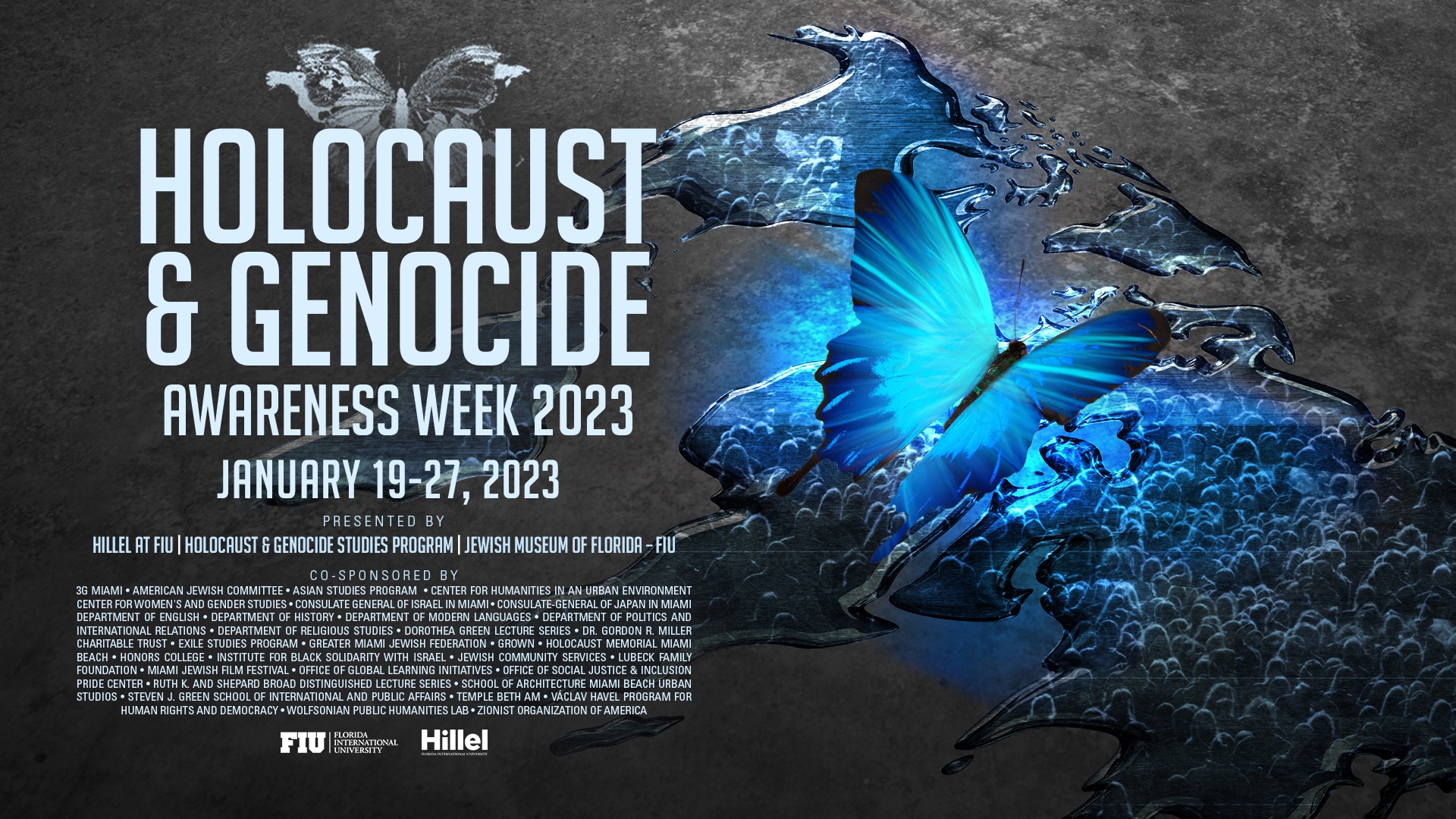 Please join us and over 30 co-sponsors for FIU’s 8th Annual Holocaust & Genocide Awareness Week, a series of 10 on- and off-campus in-person, hybrid, and online events that raise consciousness and impact our lives today. In this era of heightened antisemitism, HGAW2023 engages our community with a range of perspectives on genocide and mass violence and culminates in a campus-wide observance of International Holocaust Remembrance Day. Topics to be addressed include fighting racism, rescue during the Holocaust, gay life under Nazism and after, Jewish identity, prosecution of perpetrators, the ongoing Uyghur Genocide, and more.
Multiple campus-specific locations are listed. To locate campus buildings, please use the FIU Interactive Map.

Join us for an important discussion on unity and bridge-building among the Black and Jewish American communities with Dumisani Washington, the Founder and CEO of the Institute for Black Solidarity with Israel (IBSI), and Morton A. Klein, National President of the Zionist Organization of America (ZOA), the oldest pro-Israel group in the U.S., founded in 1897.

Chiune Sugihara was the first Japanese diplomat posted to Lithuania, later recognized as a “Righteous Among the Nations” for his aid to refugees there during World War II. Participants in this educational workshop will reflect on his actions and will craft visa tags for the individuals whose names appear on the Sugihara List in the United States Holocaust Memorial Museum.

The first Japanese diplomat posted in Lithuania, Chiune Sugihara risked his career and the lives of Jewish families to issue transit visas granting Jews safe passage through Japanese territory. In conjunction with JMOF’s exhibition The Kindness of One, join us in conversation with high school Holocaust Studies educator Toshimi Abe-Janiga and Rabbi Elchonon Abramchik, a descendant of one of the Jews helped by Sugihara.
Monday, January 23The Pink Triangle: Gay Life During and After the Holocaust
4:00 PM EST
Speaker(s): Martin, Sherman, Joanna Ostrowska, Andrea Carlo Martinez, Jake Newsome and Sean Metzger
Partner(s): Center for Humanities in an Urban Environment, Pride Center, Center for Women’s and Gender Studies, Office of Social Justice & Inclusion
Medium: Online (Zoom) (Note: Above link is a direct link to join, not a registration link.)

Following the Nazi takeover of Germany in 1933, some 100,000 men were arrested for the crime of homosexuality as established under paragraph 175 of the German Criminal Code. Thousands of these men were sent to prison, and as many as 15,000 were sent to Nazi concentration camps, where more than 60% were killed. Following the War, gay survivors of the Holocaust were still considered criminals. This special program examines this history and explores its lasting effects on gay and Jewish life into the present.
Tuesday, January 24Tuesday Times Roundtable: The Threat of Antisemitism in the US Today
12:30-1:30 PM EST
Speaker(s): Danielle Yablonka and Sam Edelman, moderated by Dr. Oren Stier
Partner(s): Office of Global Learning Initiatives
Medium: Online (Zoom)

Antisemitism, the “longest hatred,” as one commentator has famously described it, has seen a dangerous resurgence in the US, especially on social media. As part of FIU’s 8th Annual Holocaust & Genocide Awareness Week, join us for a panel discussion of this disturbing trend and what we can do about it.
Wednesday, January 25Post-Holocaust Religious Fluidity
3:00 PM EST at RB 120 and Zoom
Speaker(s): Shannon Allen and Hannah Masi, moderated by Jon Warech
Partner(s): Department of Religious Studies
Medium: In-person, Online (Zoom)

In a conversation with Shannon Allen and Hannah Masi, we explore how Jewish life went from banned during the Holocaust to part of the lives of those with Judaism in their family history.

In November 2018, 95-year-old Johann R. stood trial for accessory to murder in hundreds of cases. He is alleged to have been an SS-guard in the concentration camp Stutthof. Why did so many years pass until the start of the trial? And what does the trial mean for the survivors of the Shoah, the German legal system, and the reassessing of German history? The documentary Fritz Bauer’s Legacy, interspersed with stirring and moving firsthand witness accounts of concentration camp survivors, not only reveals the fascinating history of why it took so long for justice to find its way into German courts, but also effectively illustrates the significance of a future without organized mass murders and flagrant injustices. The special premiere event will feature the attendance of writer/director Isabel Gathof, who will introduce the film and participate in a panel discussion featuring FIU Law Professor Tawia Baidoe Ansah, moderated by Lisa Jerles, Hillel at FIU board chair.
Thursday, January 26One Million Disappeared: A Conversation with Darren Byler about the Uyghur Genocide in Xinjiang
12:30 PM at RDB 1100 and Zoom
Speaker(s): Darren Byler
Partner(s): Department of English, Exile Studies Program
Medium: In-person, Online (Zoom)

As many as one million ethnic Uyghur people are reportedly being held in internment camps in the Xinjiang Autonomous Region in Western China, where reports suggest that they are subject to torture and ill treatment, including forced medical treatment and sexual and gender-based violence. “One Million Disappeared” shines a spotlight on this situation through an in-depth conversation with Professor Darren Byler (Simon Fraser University), anthropologist and translator of The Backstreets: A Novel from Xinjiang by Perhat Tursun—the first Uyghur language novel to be translated into English. Tursun was taken into the internment camp system in 2018 and sadly has not been heard from since.
Friday, January 27Annual Remembrance Ceremony
11:00 AM EST at RDB 1100
Speaker(s): Helen Chaset, Deborah Apeloig, and Salome Benitah, moderated by Jon Warech, remarks by Shlomi Dinar, Oren Stier MC.
Partner(s): Steven J. Green School of International and Public Affairs, Department of Religious Studies, 3G Miami, FIU Honors College
Medium: In-person

The annual ceremony commemorating International Holocaust Remembrance Day includes a multigenerational panel of descendants of Holocaust survivors including Helen Chaset (2G), Deborah Apeloig (3G) and Salomé Benitah (4G). In partnership with 3GMiami, we discuss how to relay the atrocities of the Holocaust when the survivors are no longer with us.

To register for this event email your details to dzayas@fiu.edu

There are currently no events.