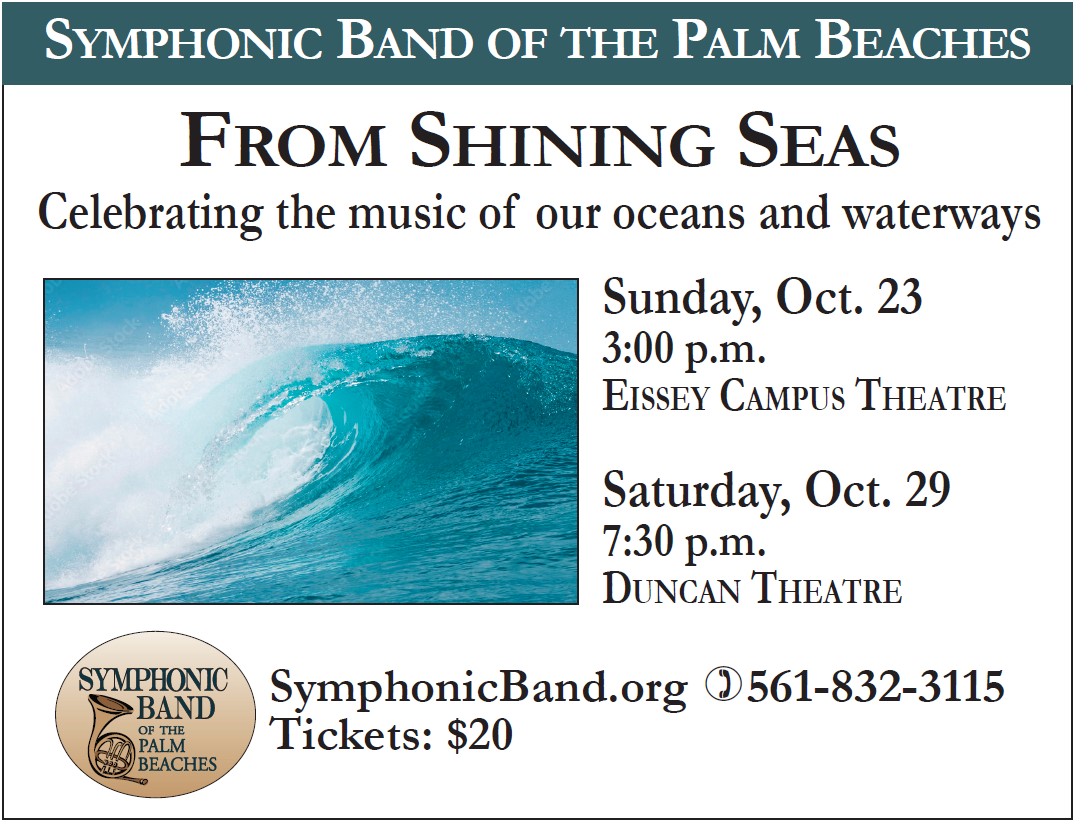 Welcome back to a new season, which here in Florida can sometimes mean higher tides and rougher waves.  So, Maestro Mark Humphreys chose to honor the seas with a selection of titles ranging from whales and seagulls to rivers and ships.

This season’s first concerts will be performed at the Eissey Campus Theatre in Palm Beach Gardens on Sunday, October 23, at 3:00 p.m. and at the Duncan Theater in Lake Worth on Saturday, October 29, at 7:30 p.m.  Single tickets are $20 each, but season tickets for all five programs are just $85, a savings of $15. Tickets are available by calling 561-832-3115, or online at www.SymphonicBand.org (service fees apply).

In tune with nature, the Symphonic Band will perform “Sailing with Whales” by Rossano Galante and “Seagull,” which is the second in the series of bird ballads by Toshio Mashima and will feature our Artist in Residence, Kyle Mechmet, on saxophone. Recalling the days of sailing ships and American history, the band will play “Parade of the Tall Ships” by Jay Chattaway, composed for the bicentennial celebration in New York Harbor.  “River Songs of the South” by William Harbison features tunes popular during the Antebellum period, and “Hands Across the Sea,” a Sousa march, was first performed in 1899 in the wake of the Spanish-American War.  The third Americana piece is “From Sea to Shining Sea,” a fantasy based on the traditional song, “America the Beautiful.”

Because naval forces have always played a role on the high seas, the program also features compositions inspired by maritime traditions. Percy Aldridge Grainger wrote a six-part English folksong entitled “Lincolnshire Posey,” of which the Band plays two movements – “Dublin Bay (Sailor’s Song)” and “The Brisk Young Sailor (Who Returns to Wed his True-love).”  The immensely popular WW2 series, “Victory at Sea” by Richard Rogers also pays tribute to the Navy, and, in conclusion, the band delights with the jazzy tune “Wave” by Antonio Jobim.

To register for this event please visit the following URL: https://symphonicband.org/ →